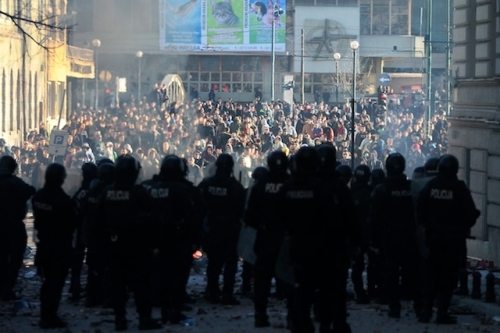 Laid off and unpaid, the workers of Bosnia’s privatized factories decided to take matters into their own hands and rise up against their government.

The multi-ethnic, industrial town of Tuzla in Bosnia and Herzegovina counts on a long tradition of workers’ struggle: at the entrance of the city a huge monument representing a miner holding a gun in place of a pick celebrates the miners’ armed rebellion of 1920 against industrial slavery, known as Husinska buna.

Read the article in Greek

You can also read it on Roarmag.org
After the nationalization of its factories under the socialist system of Tito’s Yugoslavia, in the last decades the industrial apparatus underwent a process of privatization which resulted in their bankruptcy and consequent job loss for most of the workers. The detergent factory DITA represents an emblematic case: while before the war it guaranteed 1,400 working places, after its privatization in 2007 its major owner — heavily indebted with bank loans — stopped paying pension funds and health insurance to the workers. Following the closure of their firm, in December 2012 the workers of DITA started pickets night and day outside the factory, unfortunately without succeeding to prosecute the owner.

But on February 5, 2014, DITA’s workers, together with their laid off peers of the recently privatized factories of the town, took to the streets once more to claim their healthcare and pension payments, and to get their 50 months’ back pay. The protests, led by the local trade unions, saw the workers at the forefront, joined by students and citizens of Tuzla. Pushed back violently by the police, protesters started to hurl eggs and stones against the building’s wall, while the riot police, intending to secure the entrances of the cantonal building, target of the demonstrators, reacted with teargas and rubber bullets.

The town was completely blocked, while the cantonal government and court buildings set on fire. Since the workers did not give up, two more days of unrest followed. Within days, rallies in solidarity with Tuzla’s workers were organized across Bosnia-Herzegovina. Like in a domino effect, the rage mounted across the country and the government buildings of Mostar, Sarajevo and Zenica were all torched. The increasing discontent among the social groups bearing the brunt of government policies, mainly the workers hit by the privatization process of the factories, but also students, pensioners and other affected people, led tens of thousands to join the urban guerrilla.

After the violent turn, the people of Bosnia and Herzegovina channeled their collective rage, finally unleashed, into a constructive experiment: the direct democratic assemblies called plenums, set up in around 20 Bosnian towns. Following the model adopted by students occupying the universities of Zagreb and Belgrade in 2009, but also in Tuzla the same year, and in part recalling the Yugoslav experience in self-management, people around the country gathered in a leaderless, consensus-based decision-making form of assembly where everybody has the right to one vote and nobody represents anyone else.

The workers, active and present in particular in the plenum of Tuzla, participate as individuals, and not as representatives of their trade unions or factories. Together with the plenum, they decided to stage a protest on the First of May to remind the country that their struggle is not over. While politicians are trying to hide the worsening economic conditions of the country by playing the ethnic card, the workers of Tuzla triggered a countrywide movement, shouting that rage and hunger do not recognize ethnic differences.