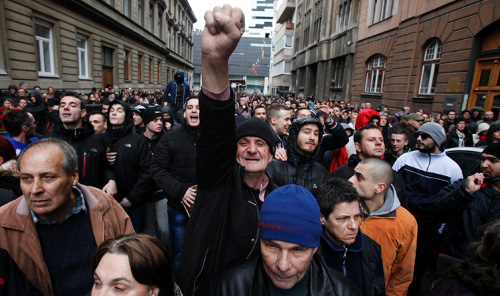 New grassroots movements, assemblies and unions are arising in Bosnia Herzegovina. Other post-Yugoslav countries experience similar returns of the left.

What’s going on in Bosnia Herzegovina ten months after the uprising?

You can also read if from roarmag.org

Following the violent riots in February 2014, the citizens of Bosnia have jointly channeled their rage into horizontal and self-organized assemblies called plenums, which mushroomed throughout the country and surfaced in as many as 24 cities and towns. Unfortunately, the flood that hit the country a few months later appears to have wiped out the new experiments of collective self-organization. But the protests, plenums and even the flood contributed to activate a solidarity chain that has now translated into an informal network calling for social justice.

Where have all the protesters gone?

The February protests kicked off in the city of Tuzla, 130 kilometers north of the capital Sarajevo, where the laid-off workers of five bankrupted factories staged a protest to get their unpaid pensions and health insurance back. Shortly afterwards, the protest exploded across the country, in the biggest protest wave the country has witnessed since the end of the war. Although the participation in the rallies faded away several months after the revolt, the laid off workers in the Tuzla area have not stopped voicing their rage. They still keep staging protests in front of the institutional buildings, claiming the salaries and pensions the factory owners still owe them. To this end, they founded an independent trade union called Solidarnost (Solidarity), aimed at uniting workers with various professional backgrounds and across ethnic boundaries.

As for the participants in the February demonstrations, many of them are still facing the continuous pressure and threat of the police and the authorities. Openly voicing discontent is still not an easy job in Bosnia. Some of the protesters have been invited for ‘informal talks’ about their participation in the February uprising, while others have been arbitrarily arrested and prosecuted based on police reports of dubious accuracy. A recent letter by convicted protesters addressed to the institutions for the promotion and protection of human rights expressed the concern over the systematic gross violations of demonstrators’ rights and freedoms in the country.

Building upon rage, anger, excitement and the melancholy of the empty squares, participants in the plenums have joined other activists from a variety of movements, assemblies, social initiatives and unions, in an informal network for social justice. In a recently issued communique, the so-called Movement for Social Justice claims to be composed of citizens united by the February protests, with the purpose of building

a society of the rule of law, of social justice and direct democracy — a society in which everyone has a roof over his/her head; lives on his/her own work and in harmony with the natural environment; develops in accordance with its own means and resources; has the right to free health care and education; and participates equally in all decisional processes of societal life.

The new network is grounded on the principles of equality, openness, inclusiveness, accountability and transparency. It operates at the state level linking citizens of both entities; it rejects formal registration to avoid being tamed by the same system it purports to fight.

Meanwhile, no change has taken place at the institutional level. The elections held in October did not bring about any change in the political panorama, which remains dominated by nationalist parties. The electoral results deeply disappointed those who harbored hopes for a change following the February revolt. But it did not surprise those advocating an overhaul of the constitution which, while institutionalizing ethnic partition, does not create a conducive environment for civic parties to get a foothold. The real winner of the last elections seems to be the 46% of population who refused to cast their vote and therefore to legitimize the existing system.

From the squares to the neighborhoods

Besides the Solidarity trade union and the network for social justice, both tangible results of the protests, other initiatives have been organized to reflect upon the February happenings. At the end of November, activists, intellectuals and citizens gathered in Sarajevo for the second edition of the Open University, a four-day public and interactive dialogue on topics seldom debated openly in Bosnia. The Open University stood as a collective and participatory effort to elaborate on direct democracy, resistance, gender, capitalism and debt, jointly with representatives and activists from the post-Yugoslav space and beyond.

As the organizers explained, at the time the first Open University took place, back in November 2013, nobody would have expected the outburst of the February protests. One year later, while Tuzla’s disenfranchised workers were occupying the local government building and blocking the exit of the city, the Open University launched four days of intense debate in the SARTR theater. SARTR, whose acronym stands for ‘Sarajevo War Theater’, is a place of cultural resistance founded in May 1992 while the city was under siege — hence, a highly symbolic location. During the four-year siege it hosted more than 2,000 performances, helping the people under siege to cope with the craziness and surrealism of the war. Similarly, in November 2014 it helped them to deal with the frustration following the protests.

“The Open University has been a counter-hegemonic moment, and it’s great it happened in Sarajevo,” said one of the organizers. It has provided for the opportunity to tackle the questions of ‘what’s next’ and what to do when the squares are empty. In the aftermath of the protests, frustration appears to be the dominant feeling. How to face the melancholy of the empty squares? Costas Douzinas, author of several books on human rights, incited to transfer the spirit of the squares into the neighborhoods, starting with organizing social and economic alternatives. “Dissolve the squares and reassemble them in the neighborhood”, said Douzinas; “the spirit goes there where it can make a change.”

But unlike Greece, “where the squares dissolved and reassembled in the neighborhoods”, to put it in Douzinas’ words, nothing similar has happened in Bosnia yet. And no comparison can be drawn with other experiences like the Greek squares or the Zapatistas communities. Different cleavages exist in a traumatized post-war society that is waking up after twenty years of oppression.

Although some argue that the plenums de-radicalized the protests, taking them away from the working class to the intellectuals-led assemblies, it seems that the direct democracy practice had a politicizing effect, beyond a merely therapeutic one. As a participant in the last Open University said, “during the plenums we did not feel awareness, we felt euphoria.” However, such a feeling of excitement can ground the basis for shaping a conscious collectivity whose members are no longer bounded by national kinships but rather by the shared willingness to take the power back in their hands. The protests and the plenums opened up a space for people to talk and to express the anger accumulated in twenty years of disempowerment and exploitation. Now time has come to realize they are part of the same mass of oppressed, no matter their national belonging.

Rehabilitating the Left in the post-Yugoslav space

Beyond Bosnia, grassroots and party alternatives are mushrooming in the post-Yugoslav space. In Serbia, at the end of November, a group of film students reopened, cleaned up and occupied the cinema ‘Zvezda’ in Belgrade, a once prestigious cinema closed since 2007 after an unsuccessful attempt at privatization. The students gathered under the initiative ‘Movement for the cinema occupation’, and organized free projections and open debates in the repossessed space.

Along similar lines the civic initiative ‘Don’t let Belgrade drown’ opposes in an active and creative way the project ‘Belgrade on the water’, an urban plan aimed at transforming a disused area by the Sava river into the biggest shopping mall of the region without having consulted or informed the citizens. Both initiatives highlight the increasing need for common and free cultural spaces, as well as for the people to have a say in the matters that concern them.

In Croatia, the Workers’ Front emerged as a political initiative of workers, trade unionists, unemployed and students aiming to converge into a political party that fights for the rights of working people and the oppressed. The Workers’ Front, founded this year, expressed the intention to run at the parliamentary elections in Croatia, as their Slovenian peers did. In a similar note, the Initiative for Democratic Socialism was founded in Slovenia this year, and ran for both the European and parliamentary elections in the United Left list. The list managed to attract 5,5% of the preferences at the European elections, but no seat, while at the national level it reached 6% and gained access to the parliament: it was the first time a leftist party entered the parliament since the end of Yugoslavia.

At the time of writing, in Macedonia the students are blocking the streets of Skopje in opposition to the government plan of having state-supervised external exams for graduates, which, in the students’ opinion, poses threats to university autonomy and limits the right to education.

It is the first time that such massive protests, civic initiatives and leftist parties blossom all together in the territory of former Yugoslavia. The Bosnian protests, in their particular aspect of articulating concrete demands through the plenums, challenged all the expectations and scholarly theories asserting the unlikeliness of an uprising in a deprived and divided post-war society. Not only did people mobilize, they also started to create an alternative.

It is hard to predict whether the Bosnian network for social justice will develop into a fully fledged social movement, or whether it will pave the way for the formation of a political party as happened in Slovenia and in Spain. For the time being a new powerful multitude seems to have emerged in the region, drawing from both the Yugoslav experience and the real democracy movement, and it is walking towards a sort of emancipatory, collective YUtopia.