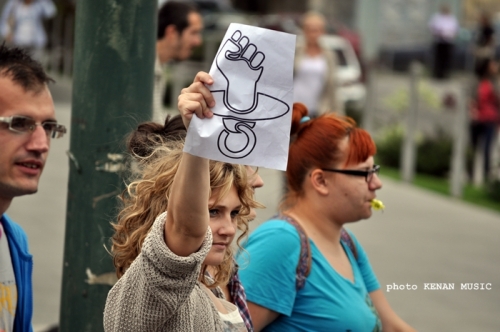 A protest against administrative hurdles to identification has sparked a broader popular movement against a dysfunctional system and for real democracy.

For over a week, demonstrators, activists and lots of children have been peacefully occupying the parliament square in Sarajevo. Since June 5th, hundreds of citizens stand in front of the building protesting against their politicians, who are unable, among other things, to adopt a permanent law on identification documents.

you can also read it on ROAR.mag“>

Nonetheless, whenever we think of Bosnia-Herzegovina, our memory recalls the war, the bloodsheds and the snipers shooting from the hills surrounding Sarajevo. The country reminds us of the Markale market slaughter, when the Bosnian Serb army dropped bombs in the midst of the crowd. The name of the city evokes its endless four-years siege and the flames wrapping around the Vijećnica, the National Library that guarded the books witnessing the multiethnic Bosnian history. Names of cities like Srebrenica and Prijedor recall the images of the first genocide in color, broadcast live on TV.

Twenty years since the end of the war, Bosnia-Herzegovina looks like a different country, although the legacy of the war is still present in the houses set on fire and kept as they are — blackened ruins “for future reference”, as their owners say. At the outbreak of the 1992-95 war, Western governments and UN agencies proved incapable of reaching an agreement for a common strategy to prevent the violence. Their belated intervention unquestionably failed to halt the war on time, nor did it put an end to the massacres of civilians. The extreme attempt of the international community to end the war by signing the Dayton Peace Agreement in November 1995 paralyzed the country into in an equilibrium that is as controversial as it is fragile.

Nowadays, Bosnia-Herzegovina appears as a confederal labyrinth composed of two autonomous entities, one of which is divided in ten cantons, an independent district, three constituent people, a tripartite presidency rotating every eight months, and a High (invasive) Representative of the countries involved in the Dayton accord. Such a senseless administrative situation results in continuous stalemates. The latest brought about the siege of the state parliament, located in Sarajevo, forcing prime minister Vjekoslav Bevanda to escape from the window because the outraged citizens were blocking the way out of the building.

The spark that ignited the protests leading thousands of citizens to stand in front of the parliament day and night was a newborn baby. But the case of Belmina Ibrisevic, a sick kid in need of urgent medical treatment outside Bosnia — but unable to travel to Germany because the Ministry of the Interior could not provide her with an ID number — was just the last straw. Claiming the right for their kids to travel abroad and to receive a medical treatment not available inside their own country, on the night of June 6th the demonstrators organized a blockade that prevented MPs and foreign investors from getting out of the parliament building. Only the High Representative’s overnight intervention allowed the evacuation of the “hostages”.

As a matter of fact, since February 2013, Bosnian newborns do not have the right to receive an ID number like all other citizens. As a result, they cannot get passports or other documents necessary to travel abroad. In February, Bosnian Serb MPs blocked the law on IDs, arguing that the name of some municipalities need to be changed before issuing new personal numbers. Since the ruling class firmly holds its power by playing on ethnic cleavages, the politicians of each constituent group now blame the ethnic opposition parties for having set up the protests. But the citizens of Bosnia-Herzegovina do not accept to label the issue under a convenient ethnic flag, as is usual in the country. For them, this is not a matter of religious or ethnic belonging — they claim that the entire system is failing.

After years of being stuck inside a system imposed by the allegedly wise men of the international community, together with their nationalist leaders, the Bosnian demonstrators managed for a few hours to hold MPs and foreign investors — mostly bankers speculating in the country — hostage to their indignation. An indignation that moves beyond ethnic cleavages. As one of the banners put it: “you are all disgusting, no matter what ethnicity you belong to.”

All around the country, protesters have expressed solidarity with their peers in Sarajevo. Rallies to support the occupiers of the parliament square have been organized in the main towns of the Muslim-Croat Federation, but people gathered together also in Banja Luka, the capital of the Serbian Republic, the entity where mostly Serbs are settled. Such widespread solidarity strikes a new chord in a country where people find it difficult — if not impossible — to mobilize cross-ethnically.

Furthermore, the (late) international intervention and years of foreign aid had a detrimental effect on the war-torn Bosnian society. In some cases, the invasive presence of donors hampered the creation of genuine movements; in others it even undermined existing solidarity networks by interfering in a destabilizing way with the locals. Nevertheless, contrary to the ones portraying Bosnians only as a passive and ethnically-divided people, the Bosnians have proved themselves able of taking to the streets to reclaim their rights and roar their indignation towards the ruling class as a whole.

Something is slowly changing in Bosnia-Herzegovina. Already in May 2012, demonstrators in Banja Luka spontaneously occupied Picin Park — the city’s green area — to prevent a bulldozer from cutting down the old trees. Even though the protest did not assume the dimension of the Taksim protests in Turkey, activists managed to set up the first massive demonstration since the end of the war. Influenced by the indignados protests elsewhere, they kept walking around the area for more than fifty days, gaining the epithet of Sijetaci, the Walkers.

Protesters claimed their right to keep free their public space, opposing the construction of buildings in the area. They also protested against the economic and social situation in the country; the restriction of their civic liberties; and the policies of Milorad Dodik, the entity’s president who is currently busy selling natural resources to foreign investors in the name of economic growth. The Walkers of Banja Luka and the occupiers of Sarajevo prove that the time has come for the Bosnians to rise up. This is only just the beginning.