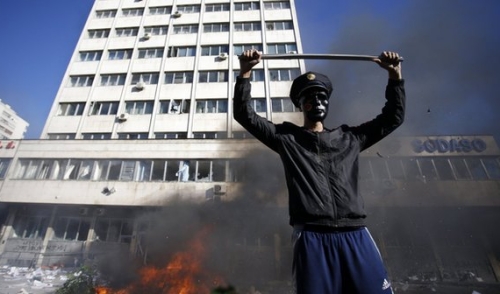 Failed privatizations, rampant unemployment and a thoroughly inefficient and unaccountable political system lie at the basis of the Bosnian protests.

Bosnia-Herzegovina finally emerged from the sidelines, once again as a country in flames. On February 5, laid off workers of the recently privatized factories of the industrial city of Tuzla, the third largest in Bosnia-Herzegovina, took to the streets to claim their healthcare and pension payments, to get their 50 months’ back pay, and to demand the government to fight youth unemployment, whose rate in Bosnia-Herzegovina ramped up to 60%.

The protests, organized by the local trade unions and the association of unemployed of the canton, and announced by the Facebook page “50.000 people for a better tomorrow”, were joined by students and citizens, who stood in front of the cantonal court building before moving towards the cantonal government building with the intention to enter its premises. Pushed back violently by the police, protesters started to hurl eggs and stones against the building’s wall, while the riot police — intending to secure the entrances of the cantonal building — reacted with teargas and rubber bullets. The town of Tuzla was completely blocked, and at the end of the day 27 people were reported arrested, while another 23 were injured.

Since the workers did not give up, two more days of unrest followed. Within days, six rallies in solidarity with Tuzla’s workers were organized across Bosnia-Herzegovina, in both of the semi-autonomous entities that compose the country since the end of the war: Republika Srpska, the predominantly Serb entity, and the Federation of Bosnia-Herzegovina, the Bosniak-Croat entity. However, while the gathering in Banja Luka, the capital of the Serbian entity, followed a pacific path, in Zenica, Mostar and Sarajevo the protests were transformed into an urban guerrilla.

After the governmental building of Tuzla was set on fire, and the head of canton Sead Čaušević resigned, on the third day of unrest even the cantonal government of another industrial town, Zenica, was torched, and its premier resigned as well. That very same day, in the ethnically-divided city of Mostar, both the town hall and the cantonal building were set ablaze, together with the headquarters of the two main nationalist parties, the Croat HDZ and the Bosniak SDA. In the capital, Sarajevo, the presidential building, hosting the national archives, and the cantonal and the town council became the target of the rage; symbols of a corrupted and incompetent political class that has been plundering the country since the end of the last war. In Sarajevo, at first, police reacted with stun grenades and rubber bullets, and clashes were reported in the Skenderija area.

Although at this time analysis and debates revolve around the violent turn the protests took, it is worth taking a step back to where and why the protests surfaced to begin with. Tuzla, the “salty ground”, had an industrial vocation since the Austro-Hungarian times. The multi-ethnic town, a crossroads of different peoples, is known for being a stronghold of the (allegedly multi-ethnic) Social Democratic Party. The largest factories in the area, nationalized under the socialist system, underwent a process of privatization after the war, which resulted in their bankruptcy and consequent job loss for most of the workers.

After the 2007 privatization of the detergent factory DITA, its major owner — heavily indebted with bank loans — did not pay any pension funds and health insurance to the workers, and, although he was sued, cannot be prosecuted owing to his alleged inability to appear in court*. Following the closure of their firm, in December 2012 the workers of DITA — a giant that before the war guaranteed 1.400 working places — chose not to go on strike but rather to start pickets outside the factory. Today, after more than one year of protests and hunger, eventually the world got to know about their grievances.

The workers of Tuzla are just a symptom of the economic collapse of the country, whose administrative and political system — imposed from without — has never worked. Their collective outrage put the question of political economy back on the Bosnian agenda, while politicians tried to hide the economic conditions of the country by playing the ethnic card. With an overall unemployment rate close to 28%, endemic corruption and an inefficient legal system, the workers of Tuzla demonstrated that precariousness as a result of the neoliberal privatization of their firms, affects all sectors of society.

Bosnia returned to the limelight, this time not as the forgotten periphery of Europe, but as a symbol of what the lethal mix of “efficient transition” (translated properly into failed privatizations) and EU/US-driven policies (translated into an inefficient and completely unaccountable administrative system) can lead to an irrepressible rage against the entire political class; which, as the people of Bosnia-Herzegovina already screamed last summer, does not represent anybody but the ethnic elites.

This time the ethnic card cannot be played any longer, because together with the workers of DITA, Konjuh, Resod-Gumig, Polihem and Poliolchem (all recently privatized factories which collapsed in Tuzla), there are the students, who were denied the right to participate in the European Erasmus+ program as a consequence of the politicians’ unwillingness to find an agreement between the different education ministries; the LGBTQ community, brutally attacked by religious extremists during the last International Queer Festival in Sarajevo; and all those subjects whose rights are denied on behalf of a successful “transition” into the same European Union that keeps feeding and legitimizing their political class.

Now Bosnia is really joining Europe — but from quite another perspective as the one originally imagined by the European bureaucrats: its squares are burning like those in Greece, Spain and Turkey.

* Thanks to Emin Eminagic for the information about DITA’s privatization process.