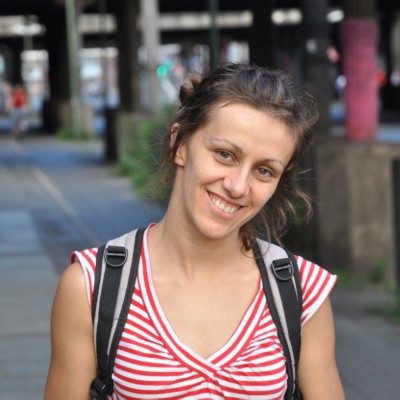 Iva Ivšić is one of the most active members of Zagreb je naš (in English “Zagreb is ours”), a green-left political platform formed in 2017 by local civil activists with the intention to bring politics back to the citizens, believing in their right to participate in the decision-making processes. Besides her engagement in Zagreb je naš, she has been active on the Antifascist network and the Organization for Workers initiative and democratization (OWID). She began to be an activist in her student days, when she got involved in the 2009 blockage of the University of Zagreb in the context of the fight for free higher education. She also took part in the Varšavska street protests against the commercialization of a pedestrian area in the center of Zagreb, and she remained an activist until nowadays. In the interview for our research, she gave quite a few interesting statements, in particular for what concerns the decision of Zagreb je naš activists to stay with one foot on the street and with the other in the institutions. In her opinion, the reason to enter the political arena by means of the electoral platform formed in 2017 was to democratize them. She motivated the decision to form an electoral platform with the following words:

“At one point, we realized that it was the time when we can enter from the streets to the institutions and to organize [our group] in a political platform and then in a political party. Also, that was the period in Croatia, and still it is, where we could see that all the political elites were detached from the people and also social democrats were in this period (and still are) losing power, also due to their politics and policies that advocate some neoliberal measures. We thus realized that there was open space for us in the political arena to enter and to gain support and to vote for people who were disappointed, social democrat voters. (…) We were thinking that we want to take politics from the political elites and to give it to the people, in a way… we wanted to change the decision-making processes, we didn’t like these institutions, and we realized, from the position we were in that time, it could not be done in the streets”

In 2017 Zagreb je naš did enter the institutions. The members of the platforms are now a part of the City Assembly, and they also have representatives in local boards (mjesni odbori) and city municipalities. But once they have entered them, they realized that it is not functioning as it should, and as it appears. Iva is also a local representative, i.e. city councilor in city district Trnje, and gave us some insights into the institutional arena:

“(…) something we realized after we entered the institution [is that] before we even didn’t know how the system was actually organized. What we realized, for example, was that the (…) whole city assembly, to the lowest level, to the neighborhood level, was organized in a way that actually is very, very centralized… Declaratively you have this neighborhood council, you have the district council, then you have the city assembly, and nominally you have the opportunity to decide (…), and people who are also in the institution have the opportunity to decide about the problems, and the issues of the neighborhood district. In spite of this, what we actually realized was that none of this is true and that everything is in the hands of the mayor, not even of the city assembly. The other thing was that when we entered the institutions we were able to get more information than we did before. Again, we realized that all of this information is not the whole information you need to have since you are in the city assembly or district level or neighborhood council. So, we realized that we have to fight for the democratization of the whole city government and that we have to fight for the information that we have the right to [get].”

In spite of those difficulties, Zagreb je naš managed to represent the strongest opposition to the mayor and his representatives in the City Assembly, and only with four members. They managed to prevent some harmful decisions by using institutional tools, while also continuing their activities on the streets. In a few years since they entered in the Assembly and in the municipalities’ councils, the members of Zagreb je naš gained large experience and through their work they got, as Iva says, “more support from citizens of Zagreb”. Maybe their decision to be both inside and outside of the institutions is the right weapon to fight for the better city of Zagreb.

*the text has been written together with Lucija Gegić, MA in Sociology and Croatian language and literature at the Faculty of Humanities and Social Sciences, University of Zagreb. Her domain of interest are social movements and sociology of everyday life. Lucija is currently doing an internship at the Centre for Southeast European Studies of the University of Graz, Austria.